A project to design and produce more than fifty deep soaking tubs for a luxury hotel in Southport has proven so successful that it has spawned a series of new product launches on the part of British bath specialist Cabuchon Bathforms. 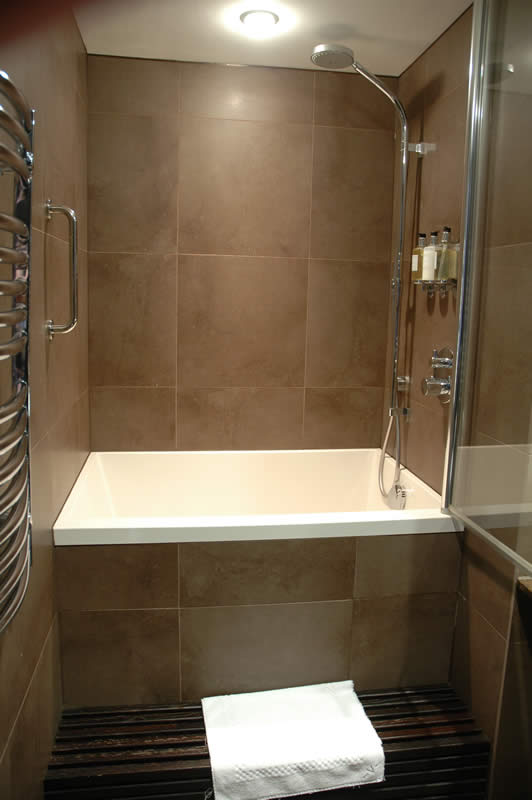 The Lancashire based manufacturer originally won the contract to produce the baths for the award-winning Vincent Hotel as a result of a meeting with its owner.

The discussions took place at the suggestion of the interior design and
architectural agency, DesignLSM, which was aware that Cabuchon and its parent company Design & Form already produced a range of deep soaking tubs, developed in the style of the traditional
Japanese Ofuro.

The boutique hotel, which provides modern accommodation and caters for weddings, conferences and corporate events, required sixty new bathrooms, most of which would feature Minimalist versions of broadly the same deep soaking design.

The hotel owner visited Design & Form’s manufacturing centre in Morecambe to explain the project and to discuss a number of special requirements. Of the 60 rooms, four would have showers alone and 56 would have soaking tubs, of which 15 would be produced in a special, larger size. They were all to be custom built to a design that satisfied the hotel’s spatial and aesthetic requirements.

Additionally, the client requested a bespoke double soaking bath for the rooftop terrace of the penthouse suite, complete with an advanced hydrotherapy system. This, together with the 56 other baths, had to be designed, approved, built and delivered on site within a period of just 12 weeks.

Cabuchon managing director Tony Pontin began by showing the owner a prototype model with an ergonomically sculpted back as well as a shallow seat, head and foot rests. The basic specification for the Minimalist design was set out and it was agreed that this would subsequently be developed in the two sizes required. A third, entirely different double model would be produced for the penthouse suite.

Despite the tight deadline, the company designed, manufactured and delivered all the baths on schedule within just 10 working weeks. More importantly, guests at The Vincent have responded very positively to them, as General Manager Damon Yoxall explains:

“Customer delight is the absolute priority at The Vincent so it’s important that every aspect of the guest experience is positive and memorable. In the bathrooms, the tubs play an important role in realising this; their look and feel fits in very well with the hotel’s boutique design and they always make a striking first impression. They’re elegant but quirky and they take us well away from the ordinary, which is the goal we’ve always pursued. We get some really good feedback from guests about the baths and they seem to appeal particularly to younger, design-conscious customers.”

Since the installation at The Vincent, Cabuchon has added both sizes of the Minimalist tub, with small modifications, to its Deep Soaking Tub range. They are now branded as the Calyx 1230  and the Calyx 1440, and have quickly become two of the company’s best-selling models worldwide.

Like all Cabuchon baths, the products supplied for The Vincent Hotel were manufactured from FICORE®, a solid composite material developed by Design & Form to offer important benefits in comparison to more conventional materials. For example, it is stronger than any non-metal or stone bath but is neither heavy nor liable to chipping. Highly durable, it carries a 25 year guarantee, permits sharpness of design detail and exhibits superior energy saving properties. Tests have shown that it keeps water hot more than six times longer than acrylic and more than twelve times longer than vitreous enamelled metal.

The Cabuchon Bathforms range includes freestanding, inset/under-mounted, panelled and deep-soaking baths, all sold in standard sizes or as custom designed units. The range also includes hydrotherapy systems custom designed for each client. The company manufactures all its products in the UK and exports throughout the world.